I recently participated in the Toronto Global Game Jam. On my team was the talented Brent Mitchell (level design, programming) and Mark Tome (artist). The theme this year was What do we do now?.

Brent and I spent Friday evening having a few pints at a nearby pub and brainstorming many game ideas. Most ideas focussed on Oculus Rift, since we thought it would be fun to develop for. All our ideas were multiplayer since we find it to be very enjoyable, and it fit the we part of the theme.

By midnight we locked down a concept. We ditched oculus entirely, but opted to use Xbox controllers for input. We got excited about the idea of playing a competitive multiplayer arena game which has several game modes, but you have no idea which mode is currently active. This means having a real objective, and potentially showing a few fake objectives in the arena at the same time, such as fake capture the flag.

Keeping to our tradition of staying relaxed during game jams, we slept in Saturday and went out for breakfast. With our forks in one hand and a pen in the other, we hashed out the rest of the game design. Which game modes we would use, how they work, how many fake objectives would be active at a time, etc.

Here is a breakdown of the mechanics:

We arrived at the jam around 2pm on Saturday and got straight to work. Brent worked on the player controls and level generation, including implementing layouts. Meanwhile I worked on coding the game framework and game modes. This took up our entire Saturday, having us back home a little after midnight. 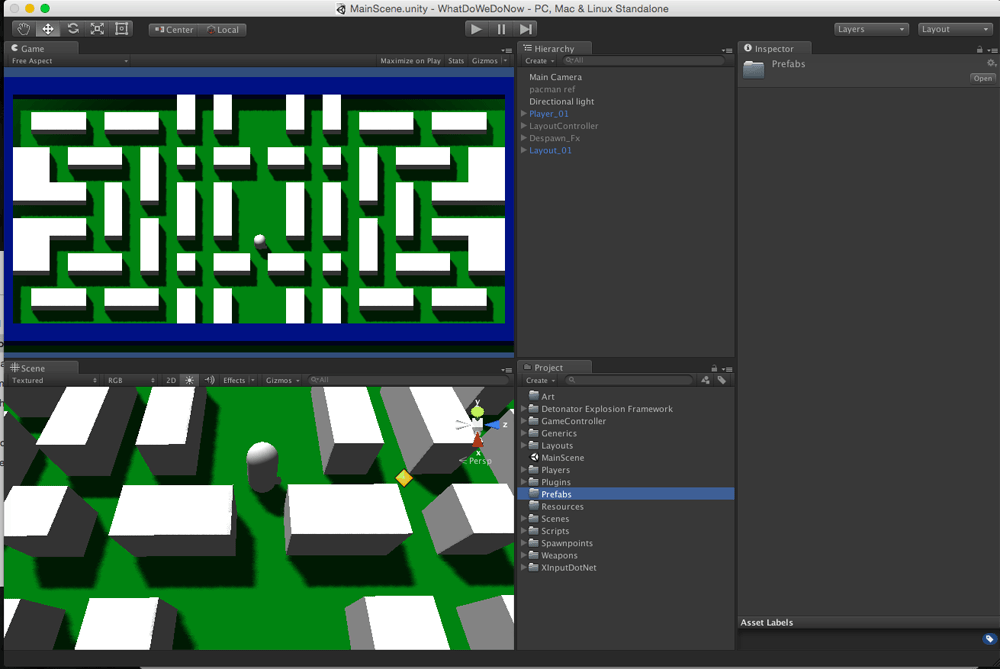 Sunday we slept in again, then grabbed some lunch to go, arriving at the jam around 1pm. We spent the afternoon merging our work together. The deadline was 6pm, and we did not even get to start testing gameplay until around 4pm. As you might imagine we were fairly frantic at this point. To our amazement however, most game modes worked out nicely and we just had to implement art and work through a number of minor bugs until the deadline.

We really cut it close this year, slightly over-scoped. We spent a few more hours the next day fixing a few more bugs and implementing the lovely sound effects heard in the video here. We had a great time developing and playing the game, so much so that we are considering implementing 4 player multiplayer. Give it a try if you have some time and let me know what you think in the comment section below. Unfortunately due to the controller library we used, it can only be played on Windows. We also have not tested with controllers other than Xbox 360/One game pads, but most should work fine. Enjoy!