Today I launched Hip Ship, a game I've been developing over the past few weekends. It's a short but challenging arcade style game where you navigate a spaceship through several mazes. You have to avoid walls and objects while beating each maze in the shortest time possible. You can optionally collect coins to slightly improve your score.

I chose to use the dimeRocker Arcade app on Facebook [disclaimer: I work on dimeRocker] as my deployment platform using the Unity game engine. The Arcade allowed me to easily integrate high scores, achievements and social features, as well as benefit from the traffic being sent to that app.

The game was originally a single level demo I made at work. I had four hours to create a game from scratch that would showcase the features used in the dimeRocker Arcade. So I decided the best way to end off with a decent looking project in such a short amount of time was to start by using one of the Unity tutorials and modify it into a simple game. The tutorial I chose was the 2D Gameplay Tutorial.

After playing around with the tutorial the thing I enjoyed most about it were the controls for flying the ship. I was then inspired to make a game out of the platforms and kill zones. This was fairly straightforward since the platform objects were setup nicely. I designed a level on-the-fly, created a spawn point, a finish point, and a timer. The score was originally based on how long it took you to beat the level. However I didn't find it very interesting if time was the only factor. So I added in the coin collecting to increase your score. I whipped up some achievements using dimeRocker based on how many coins you could collect. And that was the demo!

After seeing it get a decent amount of plays in the Arcade I decided to transform Hip Ship into a multi-level game. The largest challenge here was redoing the score system in a way that made sense over multiple levels. Considering the levels were already particularly challenging, I decided to add lives into the game. And instead of playing one level at a time, I went with the true spirit of an arcade game and had it be continuous throughout a single play. Since the levels were quite frustrating, I decided to award players with an extra life each time they complete a level. At the end of the game if you finish, you are awarded bonus points for the remaining lives you have.

Now that all is said and done I hope this game becomes a short competitive play experience among casual gamers on Facebook. And it's great that I was able to do it using completely free tools and assets. 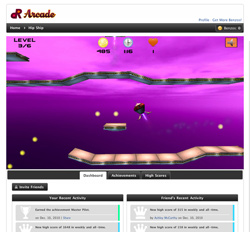